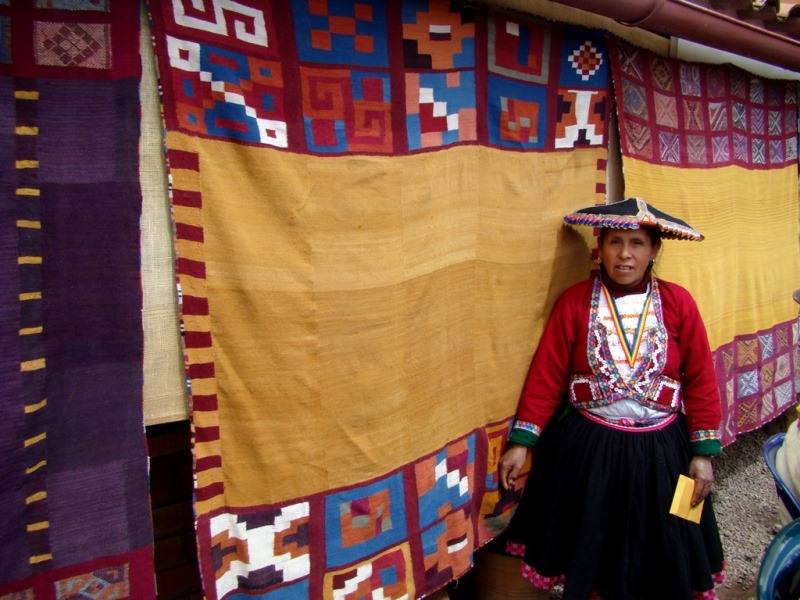 Andean Textile Arts joined Jim Kane of Cultural Xplorers, a leader in the field of sutstainable travel, in sponsoring this year’s Weaver Awards. Jim co-founded the program with Nilda in 2005. Jim attended the judging and presentation of awards in Cusco, and shares these thoughts and images:

In the globalized, digitized world where I spend much of my time, ten years is an eternity. After all, ten years ago Facebook was an unknown start-up and Twitter didn’t even exist.

Looking around me at the dozens of gorgeously attired weavers animatedly chatting in Chinchero, I kept trying to wrap my mind around a single number: 10. These Andean artists had traveled from ten rural communities as far as ten hours away to celebrate a significant milestone — the 10th anniversary of the Peru Weavers Awards.

But does a decade mean that much in the trajectory of the 2,000 year-old tradition of Andean weaving? So I found myself thinking, what exactly had been the impact of the Weavers Awards, a decade after their launch?

The impact in financial terms is easily measured. I quickly crunched the numbers: $60,000+ in cash prizes distributed to dozens of indigenous weavers from ten Andean villages — mostly female heads of households. Add tens of thousands more of direct impact the CTTC has contributed through their commitment to buy every prize-winning piece from each year’s awards. All told, over $100,000 USD over the last decade has been injected into these ten participating communities of the CTTC, thanks to the awards.

But numbers never present a human face. I preferred the stories shared with me over the years of how prize money has been used to make a meaningful difference in the lives of weavers’ families. One woman from Pitumarca paid for her gall stone surgery and another from Accha Alta was able to pay for a new roof for the family home. Others confide that they use money from the awards to help pay for their children’s education.

There’s another way to measure tangible impact – the quality and creativity of the prize-winning textiles. It’s always a delight to hear how Nilda and the CTTC board members in each community continually adapt the rules and themes of each year’s awards to generate greater creativity and teamwork. In 2006 the textile design found on the famous Ice Maiden of Arequipa, La Momia Juanita, was introduced to see how faithfully and beautifully weavers could reproduce it. In recent years, large format pieces crafted in groups have set the new standard. This brilliant competition twist incentivizes each community’s best weavers to teach and help others on their team in order to produce the finest overall piece.

Perhaps the least tangible impact has been the most significant. Whenever I’ve spoken with Nilda about the most important impact of these awards, she never hesitates. As she said to Terra Hall (www.peruthisweek.com) “The self esteem has increased in the community; weavers now have value because they bring notoriety to their communities and women have value because they bring money to their families. This is huge for an area plagued by domestic violence, poverty, and lack of resources like education. But that is all changing and the Weavers Awards have something – even if it’s very a small part – they have something to do with that.”*

About the author: Jim Kane is the founder of Culture Xplorers. He can be reached at: jim@culturexplorers.com or on Twitter: @CXJim

*This quote appears in a piece by Terra Hall in Peru This Week. To read her whole blog, go to: http://www.peruthisweek.com/blogs-artisans-win-more-than-money-at-annual-weavers-awards-103680