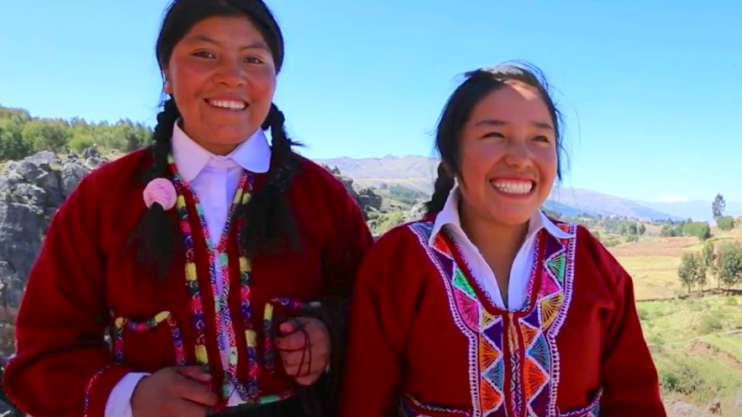 Not long ago the tradition of weaving was disappearing in Acopia, a small community located on the shores of Acopia Lago, eighty-seven miles south of Cusco, Peru. Only the older women of this lake-side village were weaving, and their traditional techniques and designs were quickly dying with them.

All of that has changed in recent years thanks to the efforts of the Center for Traditional Textiles of Cusco (CTTC) and their ATA-supported Young Weavers program. Working with Acopia elders, CTTC staff encouraged them to pass on their weaving knowledge to the youth of their village—young men and women such as Paola Medina Condori Nina and her friend Rocío Gonzales.

“I heard the call from a speaker, ‘People who want to learn to weave, come, and sign up,’” Paola recalls. “I couldn’t go at that time because I was still so small.” However, her interest in weaving stayed with her. Later, when she was fifteen, she and her mother both signed up to learn to weave at the local weaving center, the meeting place for the Cuatro Lagunas Weavers Association of Acopia. Paola admits weaving was frustrating at first and she struggled. “But, happily, I continued to attend and my mother and I learned.”

Weaving was already a part of Rocío’s life when she signed up to learn more at the weaving center. “My mom already knew how to weave the designs very well,” she says. “I helped her to plan. Now I know how to weave everything very well.”

According to Rocío, the first design she and others learn to weave is chaka ch’uro, known as the mother of all weaving to most Andean weavers. From this simple design, the designs increase in complexity. “One (design) needs twenty pairs of threads in the warp,” she explains. “It is complicated but beautiful.”

Paola knows designs such as pato (duck). “For this design, one warps fifteen pairs of threads,” she explains. “It’s very pretty because it (the duck) seems to be flying, with the wings raised.”

“In our weaving, we honor Valicha,” Rocío adds. She is referring to Valeriana Huillca Condori, a beautiful Quechua woman who was born in Acopia in 1912 and whose tragic love story inspired one of Peru’s most popular songs, “Valicha.” Living a simple life in Acopia, Valeriana became a national celebrity as the popularity of the song grew. She passed away in 2014.

Honoring their elders and ancestors is a main reason both young women weave.  But weaving also provides them with many other benefits. “Weaving for me is joy,” says Rocío. “When we are sad, we set ourselves to weaving and our whole character changes. It relaxes me. It’s as if I were painting. I’m doing something I like.”

Paola agrees. “It relaxes me too. When I’m sad or when my mom makes me mad, I start weaving. At my house, we have a place where all the weaving is. I go there and begin to weave something, and then I get into a different mood with my mother and I show her what I’ve woven.”

Weaving, as well as knitting, also allows them to earn money. “During the month, we put together everything we have made and commission an older lady to take it to the CTTC store,” Paola explains. She hopes to soon weave larger pieces such as ponchos and unkhuñas (square textiles used as carrying cloths). “These two have a higher price, so they help me better pay for my studies.”

In addition to what they create on the loom, both young women spin and dye wool from sheep, llamas, and alpacas. In Acopia, spinners typically sit on the ground to spin, resting the tip of their pushka (drop spindle) in a ceramic plate or broken roofing tile, rather than the typical method of letting the spindle hang in mid-air. This allows them to spin faster because they don’t have to tie slipknots to keep the drop spindle from falling.

Spinning enough yarn for all their weaving, however, is not possible.  “I need a lot of yarn to have several colors and to make combinations,” says Rocío. “It (weaving) is difficult because we lack materials and, also, it’s difficult to learn the weaving techniques. Both young women are thankful to the CTTC team who, with the help of ATA donations, provide them with yarn, natural dyes, weaving equipment, and a coordinator to teach them.

“Once they (CTTC staff) took us to Calca and we visited the museum,” adds Paola. “In Calca, we exchanged weavings and also did an exhibition of fabrics.” On that trip, Paola also learned about other dye plants, as well as a new textile finishing technique.

Both Rocío and Paola plan to be teachers. But even as they pursue their individual dreams, they are determined that their community doesn’t lose its weaving traditions. “The weaving will advance more because we know how to combine colors better, we participate in workshops, we meet people from other places,” says Rocío. “We are going to invite more weavers to attend the workshops.”

Paola is also steadfast in her resolve to preserve and advance her textile heritage: “I think that everything is going to increase: the designs and the fabrics. We will teach the younger ones, and the weavings are never going to disappear.”