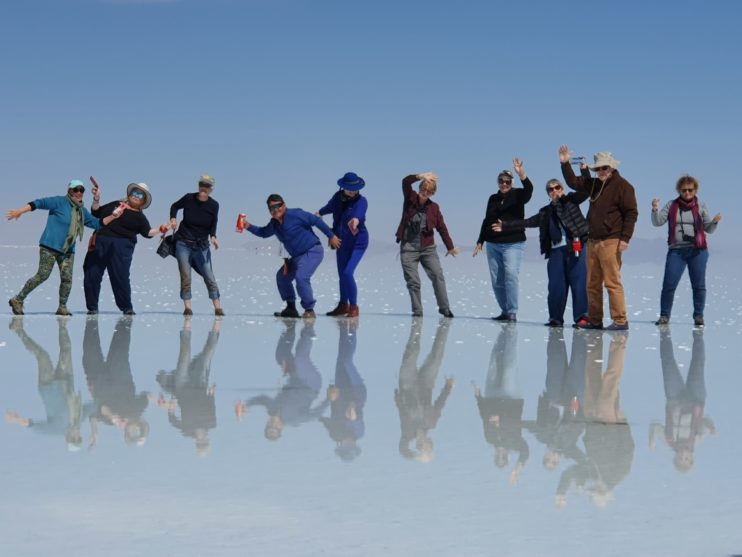 Bolivia has a rich Andean textile tradition, borne of its history as the center of the ancient Tiwanaku empire and later as part of the Inca empire from the 15th to early 16th centuries. The idea of an ATA tour to Bolivia came about during the last Tinkuy in Peru, in conversations with Andean Textile Arts (ATA) board member Betty Doerr and Kevin Healy. Early in his life, Kevin was a Peace Corps volunteer in the Lake Titicaca region along the border between Bolivia and Peru, and then he worked for years as a grant officer for the Inter American Foundation (IAF). Who better to introduce our ATA community to Bolivia?

Altitude and distances were a challenge, so we started in Santa Cruz de la Sierra (elevation only 1,300 feet) where our first stop was Artecampo, a cooperative that supports 14 artisan communities. We were delighted to learn that the granddaughter of the founder is now director of the museum there.

Highlights of the tour included:

Another highlight of the trip was to see Kevin greeted with such warmth in textile communities that he helped to fund over the years. And our “Port Townsend Trio” of tour guests even brought along 10 spindles they designed on the computer to give away.

We did feel like pioneers on this first ATA trip to Bolivia, but now we’ve paved the way! We hope with all our hearts that the current political turmoil in Bolivia will be short-lived and that you’ll join us on a future Bolivian adventure.

Jannes J. Gibson is an educator who was education program specialist at the Textile Museum in Washington, DC. At the museum, she organized lecture series, started youth tours, and developed the Celebration of Textiles event. She is also a member of the Textile Museum Council. Jannes first visited Peru in 1989 during a textile tour. She has also traveled extensively in Asia and Africa and lived in Afghanistan, Indonesia, Bangladesh, Ethiopia, and Malawi. Jannes joined the board in 2003.