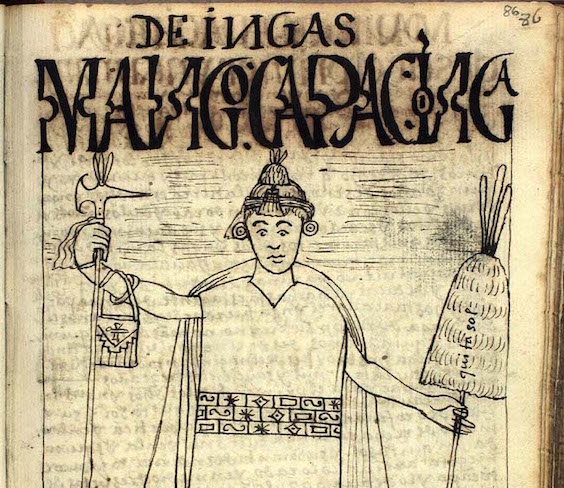 When I started researching this topic, I was merely focused on the one very old chuspa that I had in my collection, which I purchased in Peru in 1980. Chuspa is a Quechua word for bag or purse. Elaborate chuspas are used as part of dancers’ costumes during festivals; every-day, smaller chuspas often carry money (these chuspas are also called monederos). I knew that chuspas also are used for carrying coca leaves, but I never thought about the significance of coca to the Andean culture. I had only been told that the Indigenous Quechua speakers would chew the leaves to help give them energy or to keep from getting hungry.

There is ample documentation from archeological research that chuspas have been used since pre-Hispanic times. And they are well displayed in the line drawings that accompany Felipe Guaman Poma de Ayala’s description of Inca customs written in the 17th century. These drawings show chuspas being used by Inca kings and queens, local leaders, and healers. Nicola Sharratt, in her book Carrying Coca quotes explorer Sir Clements Markham as having written in 1862 that, “No Indian is without his chuspa or coca bag, made of llama-cloth, dyed red and blue in patterns, with woolen tassels hanging from it.”  From the many descriptions I’ve read and pictures I’ve seen of these early ubiquitous small bags, it’s clear that they haven’t changed much in hundreds of years.

They are seen all over the Andes region and both Quechua and Aymara-speaking people, primarily men, carry their coca leaves in their chuspas—or huallqepos in Aymara.  Author and filmmaker Andrea Heckman in 2003 noted that “. . . men are rarely seen without their chuspas, which often are finely woven and often have a separate supplemental pocket for llipta—the lime ash catalysts that activates the alkaloids in coca.”

Chuspasare predominately made on backstrap looms with handspun wool or alpaca. Designs and color will vary from region to region and village to village and from century to century, but the basic structure will be the same. Some weavers will add embellishments such as tubular edges or embroidered motifs. Nicole Sharratt’s book, Carrying Coca is filled with specific descriptions of chuspas from many different areas.  But I don’t know if it would ever be as easy to recognize a person’s community by their chuspa as it is by their hat or jacket style.

While chuspas are made using traditional techniques, the sacred substance they sometimes carry differentiates them from other everyday textiles. In the Quechua language the word for chewing coca is hallpay. It’s sort of like our coffee breaks and users will sit together and chat with friends and family as they chew their leaves. Sharing the coca is an integral part of hallpay. While this is routine, it is also highly ritualized and will affirm existing social bonds and connect individuals in strong reciprocal relationships.

Coca also has a spiritual role. Offerings of coca are made to Mother Earth or mountain gods. They can be part of ceremonies by local spiritualists or healers. Weavers might include coca leaves and invoke female saints in a blessing before starting a new weaving project. Farmers might include a coca leaf with the first seed or potato during planting season. Travelers will offer coca leaves to a sacred mountain to ensure a safe journey.

Sharratt includes many more examples of the uses of coca leaves. Just as varied are the unique designs of the chuspas that carry the sacred leaves. Each is a piece of textile artistry and a small testament to the talent of the Andean artisan who created it.

Virginia is a retired educator with a degree in Spanish from UCLA, a MA in Special Ed from CSULA, and a PhD in the same field from USC. She learned to weave in the mid 70’s and has collected textiles on her travels around the world, with a special passion for Latin American textiles. She hopes to use her fluency in Spanish to help the Andean Textile Arts board achieve their goals of supporting weavers in the Andes.