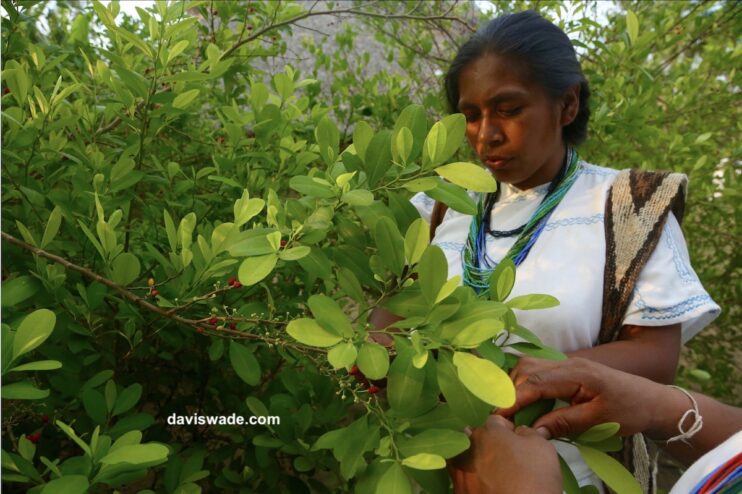 On September 13, Andean Textile Arts had the honor and the pleasure of hosting Wade Davis in a Zoom presentation entitled “Coca: Divine Leaf of Immortality?”.

Davis comes to this topic not only with great passion, but with an impressive background and list of credentials: author, photographer, filmmaker, cultural anthropologist, explorer-in-residence for the National Geographic Society, and of particular relevance to this topic, holding a doctorate in ethnobotany from Harvard University.

The leaves of the coca plant have been in use in South America for thousands of years, pre-dating the arrival of the Spanish. Rather than a drug, coca is a mild and benign stimulant with exceptionally high nutritional value. It is held in reverence by Indigenous peoples of the Andes and the Amazon, used regularly in their ceremonies, and is a spiritual cornerstone of their culture, as well as an important source of vitamins and minerals.

Davis presented an in-depth history of how coca has been regarded by the legal and political establishments over the past several hundred years, with its roller coaster ride from a panacea for a multitude of ills to a demonized scourge of civilization and back again, depending on the political expediency of the times. Coca has suffered from an association with cocaine, which is as illogical as associating the cultivation and consumption of potatoes with using them in the distillation process to make vodka.

Over the past century, many attempts have been made to completely eradicate coca and its cultivation and this has only increased since the war on drugs began in the 1970s. This has had devastating effects on the ecosystems in South America and on the 130,000 farmers who depend on the cultivation of coca fields for their livelihoods, while simultaneously creating a black market for and feeding the culture of cocaine use.

Richard Schultes, who is considered to be the father of modern ethnobotany, was Davis’ professor and mentor at Harvard. In 1973, ethnobotanist Timothy Plowman, who had also previously studied under Schultes, invited Davis to be his field assistant in a two-year comprehensive study of the ethnobotany and nutritional value of all species of cultivated coca, a study that was supported by the USDA. The results of this study found coca to be a mild and benign stimulant that is high in nutritional value, vitamins and minerals, with no evidence of toxicity or addiction.

Simultaneously, Dr. Andrew Weil, another protegé of Richard Schultes and graduate of Harvard Medical School, was studying coca for its healing properties and medicinal and nutritional value. By analyzing fifteen varieties of coca plants, Plowman and Weil found coca to be uniquely suited to the diets, effects of altitude and cultures of the Andes, giving credence to the belief that coca was given to the Andean people as a gift from the gods.

Wade Davis and Dr. Weil have recently joined forces in an effort to secure the education about, and ultimate legalization of the coca plant. Their mission is to stimulate research that will document coca’s medical and therapeutic benefits, with the goal of making it available for all peoples. Coca has great potential for weaning people from such addictions as nicotine and cocaine, and has great potential for treating neurological disorders such as ADHD, and many other health problems.

Davis gave an impassioned and compelling argument for this mission, and we can only wish him the best of luck in this quest, and for the well-being of all peoples of the Andes, and indeed, the world.

Jennifer Moore is the Treasurer of ATA and has the unusual distinction of having taught a workshop on doubleweave to Peruvian weavers at Tinkuy 2013, re-introducing them to an ancient art form from their own culture. Jennifer holds an MFA in Fibers; her work, which explores mathematical relationships and musical patterns in doubleweave, has been featured in exhibitions and publications throughout the world. She travels extensively to teach workshops in doubleweave, color, and geometric design. She is the author of The Weaver’s Studio: Doubleweave. Jennifer lives in Santa Fe, New Mexico.