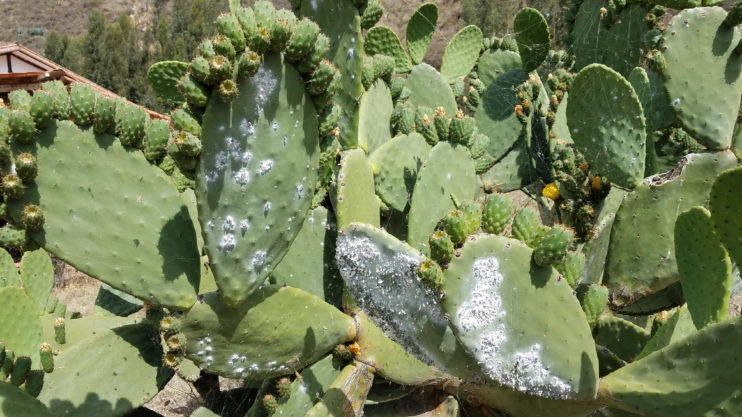 The indigenous Mixtec people of Mexico tell the story of two brothers, gods in the land of the “cloud men,” who raged in mortal conflict over fields of nopal cacti. Their blood fell upon the fields, splattering the pads of the nopal and giving future generations an “ink that would circulate through their very veins.” Thus, cochineal was born in the Mixtec pantheon of the gods.

Used in ancient times as paint, a cosmetic, and eventually textile dye, cochineal (Dactylopius coccus) is a tiny scale parasitic insect that originated in the Andean regions of what is now Peru, Argentina, and Bolivia. It migrated via coastal trade routes north into Mexico some 2,200 years ago. Its use as a textile dye began at least as early as 2300 BCE and is noted to have been one of the natural dyes used in the stunning Nasca period textiles found in Paracas, Peru.

Cochineal, used by many cultures in Mesoamerica, was highly valued and played a part in the taxation structure of both the Incan and Aztec empires. When the conquering Spanish arrived, first in the Aztec empire and soon after in the Incan empire, they did not find the gold for which they hoped, but they did make note of the silver and the amazing red dyestuff, cochineal. After silver, cochineal became Spain’s most exported item from the Americas back to Europe, reaching rates of 50,000 pounds per year by 1557 and inspiring letters of Marque and Reprisal (or “piracy”) by England. The Spanish held their European cochineal monopoly for over 150 years.

The economic impact of cochineal on the world has been and continues to be without question significant. From the 16th century until the mid 19th century discovery of aniline dyes, cochineal was the leading red dye over lac, kermes, and others. In fact, the carminic acid produced by the female cochineal is greater and more intense than the other leading two red dyes by a factor of 12 to 1! Cochineal produces that most seductive of colors, carmine, and was used not only by textile dyers, but also by European painters and illuminators.

Today, cochineal is still highly sought after and demand often outstrips supply. Identified as “carmine,” “E20,” or “natural red 4” on consumer labels, cochineal is the only edible, non-carcinogenic, natural red dye for foodstuffs as well as cosmetics. Many EU regulations forbid use of artificial red colorants so the demand for cochineal has increased dramatically. Peru excels as the major world supplier, exporting in excess of 420 tons per year, employing over 32,000 people in its cultivation (mostly by subsistence farmers), and representing approximately 95% of the world’s exported cochineal. Other smaller cochineal producers are Chile, Bolivia, Mexico, and the Canary Islands.

The world’s love affair with cochineal derives from the dye’s amazing ability to produce deep reds, purples, fuschias, and even oranges. The color produced by the female cochineal bug is variable based primarily on the pH of the dye bath and the mineral content of the water. The Andean people have worked with this dye for over 2,000 years and can create an incredible range of colors. Local water is used, along with natural alum crystals, citric acid, and pulverized cochineal (for better use of all the precious carminic acid). Unplied spindle-spun yarn (plying occurs later for better color saturation) is placed in the dyepot with the dyestuff. This simmers but does not boil. Deep reds are produced from this dyepot. By varying different elements, Andean dyers can shift the color as they desire.

Inspirational in its aesthetic power, the simple body of the female cochineal produces a red color symbolic of life, the flow of blood, and the warmth of fire. Perhaps it truly is a gift of ancient gods, held quietly in trust on a cactus pad.