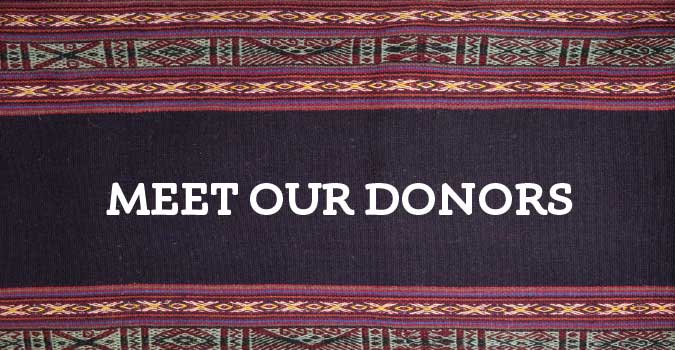 Spirited conversations with ATA donor Jean Cleavinger revealed that we both grew up in Iowa so it was hard not to spin off into tangential conversations. Jean’s father was director of the Iowa State Historical Museum in Des Moines from 1959-1980. Her mother worked at the Des Moines Register. As an only child, she spent time in her father’s taxidermist shop at the museum. He was well known for his work on birds; together her parents wrote the book Waterfowl in Iowa. Her mother’s father from Spirit Lake went on to be the doctor at the Pine Ridge Reservation in South Dakota. Jonas Poweshiek, a Mesquakie Indian from Tama, Iowa, who adopted her father, was like a grandfather to her. The experience of walking on Navajo rugs and Mexican serapes used as throws in their home and her grandparents’ stirred her interest in textiles early on. She learned single crochet and cardboard weaving from her mother.

After her first husband left the Army, they settled on Magnolia Road SE in Nederland, Colorado, happy to be near the mountains and away from the humid Iowa weather. Pain from overuse of her hands forced Jean to go to sixty percent work time in the Publications Department at the University of Colorado. She had always wanted to weave so, in her spare time, the shop Shuttle, Spindles and Skeins in Boulder became her second home. There she learned weaving from long-time weaving instructor Judy Steinkoenig and spinning from Maggie Casey, author of Start Spinning—Everything You Need to Know to Make Great Yarn. She was soon on to an 8-harness Baby Wolf, an inkle loom, and card weaving. Through a program started by popular weaving author Deborah Chandler she taught crochet to women in the Boulder County Jail for fifteen years.

Jean got her license to fly in Boulder in 1976 and bought an aerobatic Cessna150, flying as far as Dubuque, Iowa in it. After her divorce in the 80s, she joined a Buddhist group in Boulder and was a part of their flying group. To be useful, the group joined the Civil Air Patrol, where she met her current husband, an aerospace engineer with Ball Aerospace, who designed startrackers for guidance on space shuttles. They continued to fly together in the Civil Air Patrol and live in Louisville, Colorado.

Like many others, Jean was captivated by Nilda Callañaupa, founder and director of the Center for Traditional Textiles of Cusco (CTTC), when Jean was assigned to help Nilda at the Denver Convergence weaving conference in 2004. (CTTC is a main recipient of ATA grants.) Later Jean attended CTTC’s first Tinkuy conference in 2010 and remembers, “It was one of the most wonderful things I have ever been to—the geology, the architecture, interacting with communities of weavers!” She thought the Rockies were big but the Andes were amazing. She found a good excuse to return for Tinkuy 2013 when her dear friend Buff Palm had been diagnosed with terminal cancer. Four friends came together and Buff felt the trip gave her five more years of life—she died last year.

Through her generous donations, Jean helped make possible the participation of Barbara Teller Ornelas (fifth-generation master Navajo weaver) at Tinkuy 2013 and had the opportunity to watch Barbara weave in Cusco.

When we travel there is that underlining fear that we might lose our passport or credit cards and that happened to Jean in Cusco at Tinkuy 2013 on the first day. She left the taxi forgetting her purse on the floor and is forever grateful to Nilda for contacting the embassy in Lima and giving her a coca bag made by the weavers of Chayuatire.

When Tinkuy 2017 came around, Jean explained to Nilda she needed to go to Scotland to see where her ancestors had lived, and she also wanted to visit Shetland to meet Elizabeth Johnston, one of the primary spinners and knitters on Shetland. Jean had earlier commissioned a sweater from Elizabeth—the wait was long (four years) but well worth it. Elizabeth recognized her easily by the sweater! On the way to Shetland, she stopped in Iceland to embroider on a tapestry they were making in the style of the Bayeaux Tapestry to introduce tourists to a famous Icelandic saga.

Jean has since connected with Navajo tapestry weaver Lynda Teller Pete, Barbara Teller Ornela’s sister in Denver, Colorado, and is hoping to take classes in the summer of 2021. She is getting some guidance from Lynda now and has just finished her first weaving. In addition to donating to ATA, Jean has been able to help the Navajo Nation during this unsettling time.

These connections with friends and travel are what we miss so much during this time of social distancing—it is the people of a country that draw us to return.

Jannes J. Gibson is an educator who was education program specialist at the Textile Museum in Washington, DC. At the museum, she organized lecture series, started youth tours, and developed the Celebration of Textiles event. She is also a member of the Textile Museum Council. Jannes first visited Peru in 1989 during a textile tour. She has also traveled extensively in Asia and Africa and lived in Afghanistan, Indonesia, Bangladesh, Ethiopia, and Malawi. Jannes joined the board in 2003.