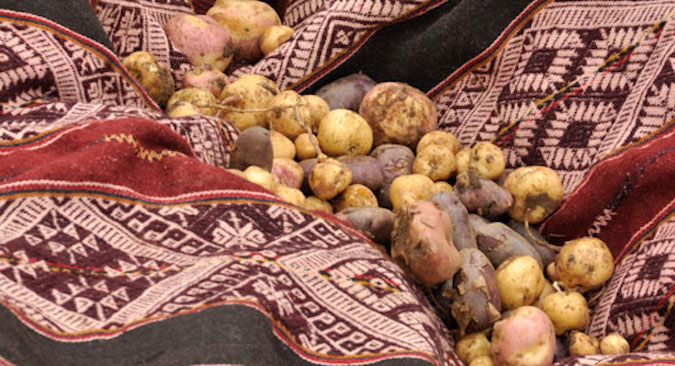 In August, Andean Textile Arts received an unusual grant request from the Center for Traditional Textiles of Cusco (CTTC)—to assist in funding a seed bank, a cooperative project between the ten CTTC weaving communities. While this request was not directly related to textiles, helping to ensure food security for the weavers was deemed well within our mission and we approved this funding.

At the very beginning of COVID, family members from the Highland villages who worked in Lima and others cities returned to their communities, thereby creating a lack of food. For example, a family of two increased to seven with the addition of a son, his wife, and three children. There soon wasn’t enough potatoes and no income to buy more as the sales of their woven textiles disappeared. Fast action was needed.

Between the CTTC communities, half of them had seeds and the others didn’t have enough. Some had chickens and guinea pigs, while others didn’t. In the Andes, one season of planting potatoes is so important because it is the main food. And if they could plant for a second season, then there would be more for next year. The Accha Alta community (elevation 11,750 ft) began plowing their fields right away in March (fall season) to plant seeds for potatoes. The Accha Alta community was the first one to ask CTTC for assistance in obtaining seeds for growing vegetables (lettuce, onions, carrots, broccoli, peas, and cauliflower). Patabamba soon followed. (Both of these communities have strong irrigation systems in place where other communities don’t.) Now, thanks to the support of ATA and the forward preparation of the weavers, they’re in much better stead for the coming season ahead.

But now another challenge has risen: The rains usually start in the Highlands in September but didn’t until early November. The growing season is now behind schedule as all the fields that were plowed to grow potatoes didn’t receive the much-needed rains. So there is an unknown factor as to what will be suitable to harvest. The waiting continues.