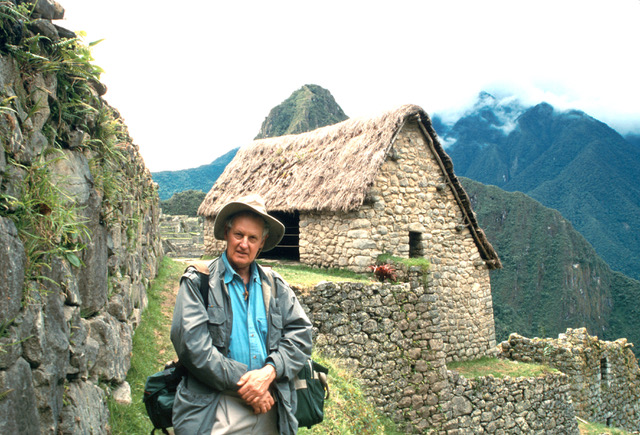 I have not totally absorbed or believed that David VanBuskirk is gone, but sadly I have to accept the truth. I am so happy that I got to see him and his wife Libby during our visit last year to their home in Melbourne, Vermont. Since I met them in Cusco in 1984, they have been part of our family.

David and Libby were very important supporters in providing for the continuation of traditional textile practices by the weavers in Chinchero. In those years, I was just starting to work with the weavers older than me. David and Libby generously provided the first budget for the development of the project to work with the weavers, through the U.S. nonprofit Cultural Survival, in coordination with Ed and Chris Franquemont. They also are gone and are with David, now. David and Libby used to come to Peru almost every year, and in those years, we shared such memorable moments in Chinchero and other weaving communities. David was a very fine photographer, documenting many first stages in the development of the weavers’ groups.

In 1990, I remember talking about developing a project to assist the weavers and support the continuity of the richness of ancient Peruvian textiles. Around 1994, with their support we founded the Jakima Club, the first young weaver’ group. Every year, when David and Libby visited, they purchased all the jakimas, the narrow bands which introduce children to the patterns of their village. Their purchase encouraged the children to weave. Together we did many projects with the children, such as visiting our important Incan sites and collecting natural dyes. The children used to call David “Papito David” out of respect and love.

David and Libby came to Cusco in 1994 with an NGO expert, Maria Tocco, to guide in the foundation of the Center of Traditional Textile of Cusco as a nonprofit organization. David was a professional guide, advisor, friend, and companion, always encouraging and fun to be with. He planted good and fertile seeds with the founders of CTTC, and David assured the continuity and growth of this project, which benefits over 500 weavers directly today. He and his wife Libby, along with the Franquemonts, were founders of Andean Textile Arts, providing support to the Center. There is so much to say, and his passing is very sad.

David, rest in peace. You are in my heart forever and in the hearts of the weavers with whom we started CTTC and the many good-hearted people that have joined CTTC since.

Nilda Callañaupa is an indigenous Quechua weaver from Chinchero in the Cusco region of Peru. Along with other Quechua weavers from Chinchero as well as international supporters, she helped to establish the Centro de Textiles Tradicionales del Cusco (Center for Traditional Textiles of Cusco) in 1996 as a non-profit organization. Since 1996 until the present day, Nilda has served as director of the Centro de Textiles Tradicionales del Cusco or CTTC. She has written two books on Peruvian weaving, and has co-authored a third on weaving elders of the Peruvian Andes.