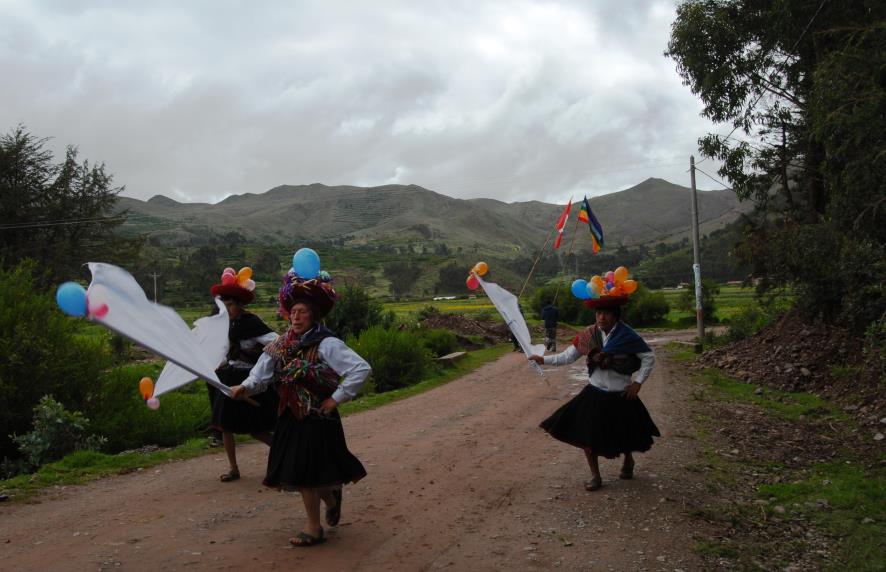 Carnaval is a very important time of year in Chinchero, as in many areas in the Cusco region. During Carnaval there are numerous activities in which the population participates; one of these is Mojonamiento.

It’s a bit past 5 am and the mayors, or varayoc, are beautifully dressed in their red ponchos, carrying their ceremonial rods. The resonant sound of their conch shells, or pututos, announces the beginning once again of mojonamiento.

During this festivity people in each district join together with their mayor in an ancient ritual that has the objective of renewing and upholding the boundaries that separate one community from another.

The activities begin in Chinchero’s main plaza with the waylacas, who play an integral part in the festivity. Surprisingly, waylacas are men who are dressed as women. They dance to the music of flutes and drums, carrying flags, giving color and essence to the festivity that is about to begin.

It’s almost 8 am and everyone is ready to begin the walk up the mountains to renew the boundary points between the communities and ensure that they are respected. Everyone walks together – the mayor, the waylacas, and the community members. The music echoes through the hills, beautifully green during the rainy season, and the community continues the path up the mountain accompanied by the music and the sound of the pututos.

They come to the first boundary point, which they decorate with their rods and crosses of flowers; here the mayor ratifies that this boundary point belongs to their community, reciting the names of the Apus or spiritual gods which surround them as he performs a prayer in which everyone participates.

Here they also share coca and a bit of alcohol during the offering to the Apus in what is called a tinkaska.

The pututos announce that they shall continue walking towards another boundary point where the same type of prayer and offering is recited again. During the walk, many more community members join in, and at the end of the day everyone joins together to share food and drink.

The children also imitate their fathers and naturally begin to take notice of the tradition that they will continue in the future.

As the afternoon arrives, the community members dance around a tree adorned with presents as it is part of the Carnaval celebration. As the music plays, they work in pairs to try to cut down the tree in pairs; those who cut it down will then be in charge of the tree and music celebration for next year.

Jenny Callañaupa was Community Coordinator and Education Department Manager for CTTC. She is currently working with a number of non-profits and government organizations on the preservation of traditional textiles in the communities.