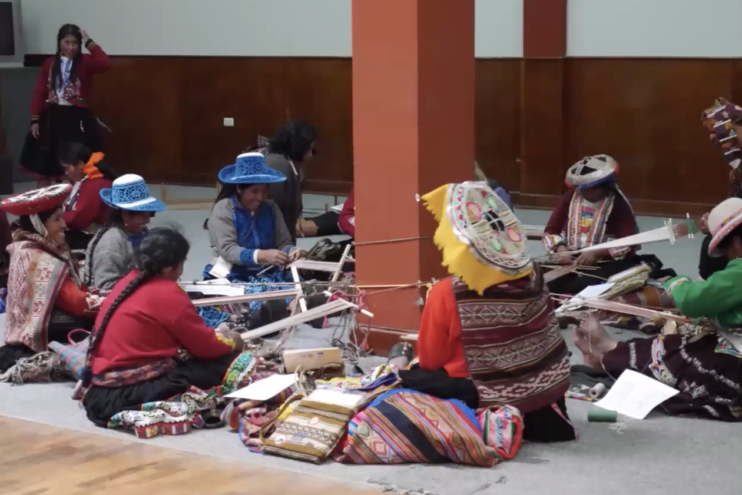 Renowned weaver and ATA board member Jennifer Moore fell in love with doubleweave soon after her first weaving class in college. She was intrigued by being able to weave two separate layers of cloth at the same time, and most especially the possibility of creating design by interchanging the layers, a technique called doubleweave pick-up. As she explored this versatile weave structure over many years, she encountered the doublewoven designs of the pre-Columbian cultures of the Andes. Duality and complementarity (the balanced interchange of dual elements) are core concepts in the indigenous Andean worldview. From pre-Columbian and Inca cultures to today’s indigenous communities, interdependent and reciprocal relationships have always been central to Andean life. For example, since the COVID outbreak interrupted income from weaving, Andean families have helped each other bring more fields into production through the traditional system of ayni, “one day for me, the other day for you.” In pre-Columbian times, these values were also expressed through doublewoven textiles but, sadly, the doubleweave technique was lost in Peru as a result of the cultural disruption after the Spanish invaded the country.

For years, Jennifer longed to go to Peru and see the ancient doubleweave textiles for herself. She had met Nilda Callañaupa, the Director of the Center for Traditional Textiles of Cusco (CTTC) at the International Folk Art Market in Santa Fe, New Mexico, and her interest grew. So, in 2010 when the CTTC announced the first Tinkuy, an international gathering of weavers of the Americas, Jennifer jumped at the chance to see Andean weavers in action, and also to get an up-close look at the ancient textiles at the Amano Museum in Lima, one of the finest collections of pre-Columbian art in the world. She signed up for both the conference and the ATA tour afterwards.

The conference in Urubamba, a small city in the heart of the Sacred Valley of the Incas, was attended by about 300 weavers from all over the world, the majority from the communities in the valley. There were lectures, panel discussions, weaving demonstrations, spinning contests, music and dancing, an amazing cross-cultural exchange. After the conference, the ATA tour visited a number of the communities to spend time with the weavers, had a natural dye workshop in Chinchero, visited Machu Picchu, then went on to Lima to visit the Amano Museum. Jennifer finally got her wish to see its ancient doublewoven treasures, with their complex, symbolic patterns and exquisite symmetry.

After that first trip, Jennifer volunteered to work in CTTC’s booth at the yearly Folk Art Market. In 2012, Nilda Callañaupa came to Santa Fe for the market and stayed at Jennifer’s house. One night, Nilda sat Jennifer down and told her that CTTC was planning another Tinkuy, for November 2013. Since Jennifer is a renowned double-weave instructor, and the technique had died out among indigenous Andean weavers, Nilda asked Jennifer to come to the conference and teach 20 of the most skillful weavers from the CTTC communities to do doubleweave pick-up, so the CTTC communities could revive the technique in Peru.

Jennifer was both honored and overwhelmed. Nothing about this was going to be easy, she knew. She weaves on European-style floor looms, yet she would have to teach doubleweave pick-up on the backstrap looms that the CTTC weavers use. The ancient Andean doubleweave pick-up technique is a bit different from Jennifer’s, so she had to learn that. And then there was the language barrier: Spanish is a second language for both Jennifer and the weavers, and many of their weaving terms are in their native Quechua language.

For the next year, Jennifer listened to Spanish tapes every time she drove in her car. She studied the Andean double-weave structure. But how to set up a backstrap loom for doubleweave? She found a Guatemalan weaver in Santa Fe who worked on a backstrap loom, but what he called “doubleweave” turned out to be a double-faced cloth, not two layers of cloth. Time was flying, Tinkuy was perilously close, and panic was setting in when Fate smiled. In July of 2013, Laverne Waddington, a weaver and teacher who has studied backstrap weaving techniques all over the world, appeared in the CTTC booth at the Folk Art Market. She was on a U.S. teaching tour, and it turned out she had a few days in Santa Fe and time to help Jennifer figure out to set up a backstrap loom for doubleweave. Soon Jennifer had looms set up and a sampler—with llamas!—worked out to teach to the weavers. She also wrote down the steps for the weaving and sent them to Nilda ahead of the conference to be translated into Spanish.

November came, and Jennifer flew to Cusco. This second Tinkuy had over 500 weavers from around the world, and it began with a parade through this capital city of the Incas. Jennifer’s class gathered, but as she started trying to teach from the directions she had written, she was greeted by “20 pairs of eyes looking like deer in the headlights.” She quickly realized that the Andean weavers were used to learning by observing their mothers and other family members, so she gave up the idea of written directions and just sat down to demonstrate. She says, “They watched and looked at it from all different directions, and then they just sat down and did it! I went around the room and helped out by demonstrating or with signing, and they took to it like ducks to water.” The weavers were so enthusiastic, they didn’t want to take lunch breaks or go home in the evening. When the llamas began to emerge from their weaving, they were delighted. On the last day, the weavers learned to set up their own looms for doubleweave, so they could go home and teach others in their communities. The class was a success!

Fast forward four years. Jennifer’s students had gone home and taught doubleweave pick-up to others in their communities, and their designs had become finer and more complex. Through the generosity of our donor community, ATA was able to sponsor a field trip for some of the weavers to the Amano Museum in Lima. There they were able to experience the pre-Columbian doubleweave textiles that are their cultural heritage. And, in 2016, the CTTC held a doubleweave pick-up competition among the weaving communities.

At the third Tinkuy, in 2017, Jennifer got to see how the seed of the doubleweave class had grown. In addition to the conference attended by almost 900 participants from around the world, the Museum of San Francisco de Assisi and the gallery at the conference center hosted an exhibit of doubleweave pieces by the CTTC communities. Jennifer went to Cusco early to help mount the pieces and set up the exhibit, and she was impressed and delighted not only by the weavers’ skill but also their rich designs, use of color, and artistry.

In 2019, the CTTC weavers decided to take their doubleweave skills to a whole new level: speed weaving! Earlier in the year, the Young Weaver’s groups from the CTTC communities had come together for a day-long Encuentro, a gathering to make connections and share techniques and ideas. The youth came home so enthusiastic that the adult weavers requested an Encuentro of their own, and timing worked out so that year’s ATA tour participants were able to join them. The weavers of the 10 communities gathered in an open field in a resort in Pisac, enjoying weaving competitions, dancing and singing, competitions and games, and even a yoga class. Since Jennifer was one of the tour leaders, she was invited to judge a doubleweave pick-up competition in which each weaver had 90 minutes (!) to weave their own original design of a condor. The time-limit proved to be optimistic, but after the deadline was extended to 3 hours, many of the weavers did complete their designs, and a flight of condors in cloth were admired by all.

Left: A set of community weavings from the Tinkuy 2017 doubleweave exhibit. Right: Carolina Champi Ojeda, from the community of Patabamba, weaving her condor design. Photos by Jennifer Moore.

About 6 months after the Encuentro, COVID came to the high Andes, taking a terrible toll in both illness and lost income. We all hope that vaccines will be widely available in Peru soon and that the weaving community can gather again at Tinkuys and Encuentros. In the meantime, CTTC is committed to continue reviving doubleweave and other ancient techniques. The weavers are working on smaller doubleweave pieces that they can sell to generate income, and they continue to refine their skills. Jennifer is confident that their progress will continue, and she can’t wait to travel to Peru again and see where their journey will take them.

Lead image: The doubleweave students at their looms. Photo by Jennifer Moore.

Anita Osterhaug is former editor of Handwoven magazine and the Vice President of Andean Textile Arts. She is a writer and journalist who has been devoted to textiles since her first embroidery project at age eight, though her writing skills have also taken her into the high-tech world. She studied history and anthropology at Reed College, and participated in the 2013 Tinkuy international weaving conference in Cusco.