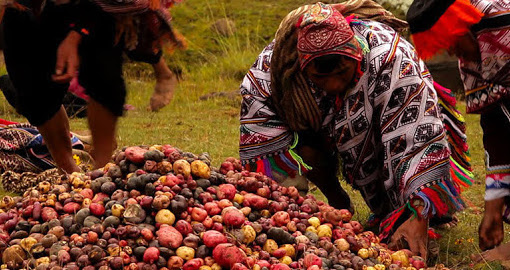 Looking back, would it have been possible to survive in the Andes without textiles, for warmth, for ritual, for celebration? Hard to imagine. It’s also difficult to imagine the Andes without the potato. In the Andean Quechua village of  Accha Alta alone there are 130 varieties, out of a total of 4,600 types of potatoes in Peru: Saqmari, in the shape of a fist. Pusi Q’achun Waq’achi, tough skinned. If you can peel it, you’ll make a good daughter-in-law. The name literally means “make your daughter-in-law cry.” Muru Q’ewillo, crooked like the horns of the cow. Muru Wayru, use it the wrong way and you can be cursed. Puma Runtu soqu, like the testicles of the puma. Ch’eque Pour Soqo, the color of the nightingale’s feather. The squat greyish tuber Yana Poqochua, like the nose of the alpaca. The yellow indented Puma Maqui, puma’s paw. (Puma Maqui is also a textile design in the neighboring village of Patabamba.) Thanks to the young weavers of Accha Alta for sharing these names. They are proud of their potatoes, the best in the region.

It is in Accha Alta that you can find Simeon, a weaver famous for weaving costales, potato sacks. Like the braided slings and ropes you will find there, these are made in the natural colors of the alpaca and llama. They are the perfect size to hold fifty pounds of potatoes, the most a llama can comfortably carry on the way to market. Before blue plastic replaced these woven sacks, trains of llamas would transport costales through the Andes. It is also in Accha Alta that you can find the remains of qolqas. My Accha Alta friend Julian has the ruins of one behind his house. “From another time,” he told me. The Incas used these oval buildings as warehouses in cold, dry places high in the Andes, like Accha Alta, to store potatoes. They fed the Incan armies and  people during hard  times, droughts years, and bad harvests. The potatoes could last for ten years, because they were freeze dried.

My introduction to these potatoes in the Andes took place when I first visited Chahuaytire. The village had no weaving shelter then, and we were served guinea pig by the side of the road with something that tasted vaguely like water chestnuts. It was moraya, and water was in fact involved. We walked down a dirt road past a minuscule chapel, locked up with the key jealously guarded. It was built in the sixteenth century, one of the first of its kind in the country side. Up above on the hillside were the beehive remains of Wari tombs. Not far away were petroglyph paintings of deer. People have lived and died around Chahuaytire for thousands of years. The weavers took us to the side of a stream where they had put potatoes in woven bags in the icy waters for a few days, then spread them out to dry in the sun. These freeze-dried potatoes would provide food for the weavers’ families throughout the winter. Potatoes have been preserved this way since before the time of the Incas.

Some Quechua communities make chuño instead, by spreading small potatoes on the ground covered in woven cloth and leaving them outside overnight to freeze. Temperatures in the high Andes can go from a hot afternoon to below freezing in a matter of hours, since the thin air can’t hold the heat. When the  hot sun shines down on the potatoes, they are trampled to remove the water and skin. The whole family can do the stomping and squeezing, repeating the process over the course of several days until you get the small, light chuño. If you visited one of these weaving communities and were served soup, you probably had moraya or chuño.  And you may find the potato flower design in the textiles you bought there.

Just as textiles serve many purposes in the Andes, so do potatoes. The Incas believed potatoes were a gift from the sun god Inti for the preservation of the body. Penicillin is formed during a long fermentation process in the Andes to make tokosh. It’s used in healing countless ailments, and is used postnatally. The potato is used as sustenance, for good health, and in celebrations it appears side-by-side with textiles. When my family lived in Cusco, Peru, a potato tied to my son’s forehead was used to treat a fever. My personal connection with the potato goes beyond my time spent in the weaving communities of the Andes, or my son’s health for that matter. When the potato reached Europe and then their shores, the Irish learned they too could feed the whole family on potatoes. These spuds have everything you need. When they were blighted though, a million people perished, including my great-great-grandfather Daniel Desmond. If only they had known about chuño and moraya and had the conditions to make them.

Elizabeth Doerr is an ATA board member, and has worked for the past 30 years as an organizer and fundraiser for community-based organizations in Latin America and the San Francisco Bay area. Elizabeth spent 2001-2002 living in Cusco with her husband, former board member Tim Wells, and their two children. She serves as an advisor to the Center for Traditional Textiles of Cusco (CTTC). An educator by training, she taught urban school children and trained urban school teachers for twenty years.