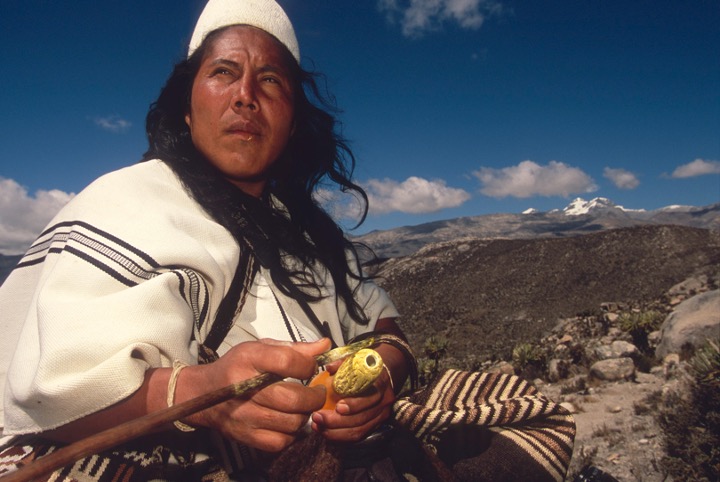 Coca is not cocaine. To equate the coca leaf with the raw alkaloid cocaine is as misguided as suggesting that the delicious flesh of a peach is equivalent to the hydrogen cyanide found in every peach pit. Yet, for nearly a century, this has been precisely the legal and political position of nations and international organizations throughout the world.

Join renowned cultural anthropologist and ethnobotanist Wade Davis as he delves into the cultural suppression surrounding the coca leaf. Learn more about this mild and benign stimulant that has been revered and consumed by the Indigenous peoples of the Andes for nearly 8,000 years. And gain a better understanding of why policies to eradicate coca essentially amount to cultural genocide.

The hour-long presentation will take place on Tuesday, September 13 at 7 p.m. (ET) via Zoom. Proceeds from the $10 registration fee will go to further support revitalization of Andean textile traditions.

Don’t miss this chance to learn about the cultural traditions and complications of coca from one of the most respected experts on the subject.

Wade Davis is a cultural anthropologist, ethnobotanist, best-selling author,
photographer, and filmmaker whose work has taken him from the Amazon to
Tibet, Africa to Australia, and Polynesia to the Arctic. Explorer-in-residence at the National Geographic Society from 2000 to 2013, he is currently professor of Anthropology and the B.C. leadership chair in the Cultures and Ecosystems at Risk department at the University of British Columbia. He spent over three years in the Amazon and Andes as a plant explorer, living among fifteen indigenous groups in eight Latin American nations while making some 6,000 botanical collections. He currently serves on the advisory board for ATA.