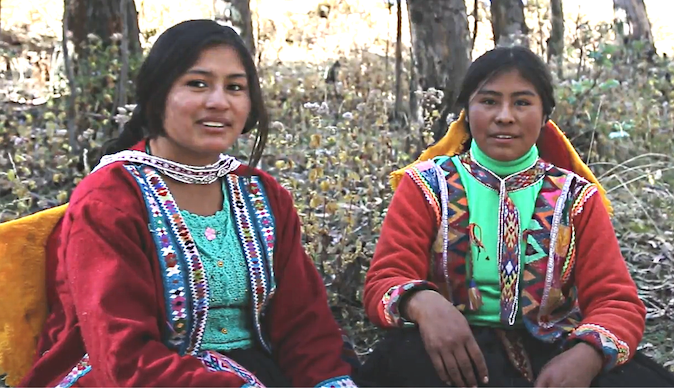 This is the third in a series of blog posts based on interviews with young people throughout the Peruvian highlands who are reviving their traditional textiles through the Young Weavers program of the Center for Traditional Textiles of Cusco (CTTC), an important effort your ATA donations help support.

Hermelinda Espinoza Mamami and Ana Maria Huamán Qori wear the dress of their ancestors as they talk about their weaving and its importance in their lives. Their fringed monteras (hats), juvunas (short jackets), and polleras (wide black skirts) with brightly colored borders reflect their people’s past and showcase the extraordinary local artistry these two young women want to carry into the future.

“Years ago we weren’t remembering the old dress,” Ana Maria points out. “Since we have participated in the (CTTC) handicraft workshops, we are dressing in our typical style, made by our own hands.”

Both Ana Maria and Hermelinda are from Sallac, a small mountain village twenty-four miles south of Cusco, Peru. Here, among towering peaks and spectacular views of the Ausangate valley below, weavers for generations have expressed their spiritual beliefs, love of nature, and cultural pride through designs and techniques unique to their community.

One form of weaving Sallac is known for is watay, a special tie-dyed warp technique that dates back to pre-Incan times. “The watay pattern is done with corn leaves,” explains Hermelinda. She describes how the leaves are used to tightly wrap sections of light-colored warp to create a pattern, then the warp is dyed, leaving the wrapped sections the original color. “We weave watay by being careful and delicate with the dried corn leaves, which we also call ph’anqa,” adds Ana Maria. “When we weave watay, the ponchos and mantas (a type of shawl) are elegant.”

The weavers of Sallac are also admired for their highly elaborate embroidery, which is the primary way they create designs on their woven pieces. (Although, sometimes supplementary warp-faced design techniques are used.) Ana Maria says she knows how to create designs such as truchhac huactan (trout’s rib) and mayuph’uytu (which represents the deep part of a river and how the river  sometimes zig zags). “Our ancestors, in order to make designs, were inspired by the animals, the spider, llamaq sillun (llamas’ fingernails), and rosas t’ikacha (little rose flowers),” she says.

Hermelinda has learned many traditional designs as well, including the rosas tika (roses flower) and ch’uro (a design representing a small insect). “The design ch’uro is woven by combining two colors,” she says. “This is the first design that everyone should learn. For this reason, it is said that the ch’uro design is the mother of weaving.”

For both young women, their interest in weaving started at an early age. Ana Maria was twelve, Hermelinda eight. “My mother weaves beautiful designs,” explains Ana Maria. “She was my first teacher.” Hermelinda’s mother is also a weaver. “Many times, I accompany my mother when she goes to the handcraft workshops,” she adds. “There I can see older women weaving. From these experiences I have learned to weave calmly.”

Weaving has now become such a part of their daily lives that they even take projects with them into the hillsides when they tend their family’s animals. “If you weave a small garment you can carry it with you and weave wherever because we use our toes (to hold the warp taut),” Ana Maria explains.

Typically, however, much of their weaving is done on a backstrap loom. Hermelinda and Ana Maria describe how two stakes are put into the ground and the back end of the warp threads are tied onto a horizontal stick called a jullcha that is secured to the stakes. Using a belt, the weaver then ties the front end of the warp to her or his waist to create the tension needed for weaving. A variety of tools—such as kaullas (weaving swords), a ruki (beater), and an illawa (rod with string heddles)—are used to create beautiful patterns in the cloth.

Hermelinda’s favorite weaving projects are scarves. Ana Maria says her favorite things to weave are small ch’uspas (bags/purses), which she likes to embroider with piñis (small beads). “The ch’uspas are useful for carrying a cell phone, notebooks, and other things,” she says. “Our parents use the ch’uspa for carrying coca leaves.”

As members of the ATA-supported CTTC Young Weavers program, Hermelinda and Ana Maria receive materials, instruction, and other assistance for their weaving. They also have the opportunity to take field trips. “Through the CTTC, we receive orientations where those who participate in handicrafts go out to the other communities to get to know them and share (weaving knowledge) without fear,” says Ana Maria.

But the Young Weavers program goes even further. “We sell (our textiles) in the same office as the CTTC,” explains Hermelinda. “They send us the requests (orders) and we weave them according to the requirements.”

The ability to sell their handwoven textiles through CTTC has given the two young weavers a new-found independence. “When I didn’t know how to weave, I depended on my mother, so that she could teach me,” says Anna Maria. “Now I am independent, and I can do it alone. By selling my textiles, I can buy my books (and other school supplies). I have money, and I don’t depend on my mother.”

Weaving means many things to these two young women: It is a way for them to preserve the textile traditions of their ancestors. It provides them with a source of income and a sense of pride. And, as Ana Maria and Hermelinda remind us all—it’s also a lot of fun.

“Weaving motivates good thoughts and, in these thoughts, you arrive at new ideas for creating other designs,” Ana Maria says. “We weavers have happy hearts.”

Many thanks to Virginia Glenn for translating this interview from Spanish.