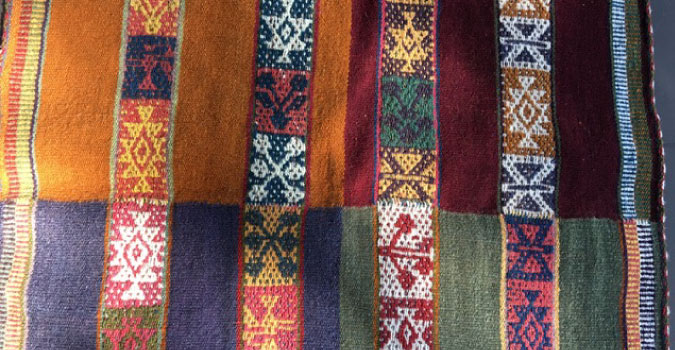 Scaffold weaving, also known as discontinuous warp, or ticlla in the Quechua language, is a remarkably complex and time-consuming ancient weaving technique. It originated in the Andean region of South America—the only place in the world where it existed—during the Middle Horizon and Late Horizon periods (AD 400-1535). We are fortunate that a number of examples of pre-Columbian scaffold weaving can still be seen in museum collections today. This technique has now been revitalized and is being practiced in Pitumarca, Peru, one of the ten weaving communities that comprise the Center for Traditional Textiles of Cusco (CTTC).

In most weaving techniques, the warp threads are continuous lengths from the top end of the backstrap loom to the bottom. In scaffold weaving, however, two different colors of warp threads are interlocked with each other to create areas of design in distinct colors. This is accomplished through the use of scaffold cords or rods that can be placed at one point along the length of the warp, or along multiple points throughout the warp. As the weaver approaches the areas of interlock, a shed cannot be created, and the weaver has to fill in these areas by weaving with a needle. Scaffold-woven textiles can be as simple as a four-color quadrant, and as complex as a multi-level and multi-color piece that may also include warp sections with intricate pick-up designs.

In 2010, a group of us attended the Tinkuy conference in Peru and afterwards went on the Andean Textile Arts tour of the region. During the tour we visited the village of Pitumarca, where we watched two women wind a scaffold warp and also viewed some scaffold weaving in progress. At that time most of the pieces available for sale were fairly small and mostly consisted of quadrants in four colors with vertical bands with pick-up designs.

Since that time I have been volunteering each year at the CTTC booth at the International Folk Art Market in Santa Fe. Each year I have seen the pieces of scaffold weaving brought to the market become larger, more complex, and more finely woven. As Andean Textile Arts and CTTC have educated the collector base about the amazing skill involved in weaving these pieces, the prices have risen and the quality has markedly improved. By providing a discerning market for these exceptional textiles, Andean Textile Arts believes the weavers of Pitumarca will be motivated to continue developing the artistry for this technique that was once lost to time.

*Thanks to Virginia Glenn for the photos in this post, taken in Pitumarca during ATA’s 2010 tour.

Jennifer Moore is the Treasurer of ATA and has the unusual distinction of having taught a workshop on doubleweave to Peruvian weavers at Tinkuy 2013, re-introducing them to an ancient art form from their own culture. Jennifer holds an MFA in Fibers; her work, which explores mathematical relationships and musical patterns in doubleweave, has been featured in exhibitions and publications throughout the world. She travels extensively to teach workshops in doubleweave, color, and geometric design. She is the author of The Weaver’s Studio: Doubleweave. Jennifer lives in Santa Fe, New Mexico.