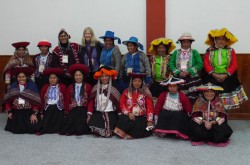 Be careful what you say “yes” to. In this case, by saying yes, weaver Jennifer Moore created the richest personal experience of her life.

Jennifer is a foremost authority, weaving teacher, and author on the subject of double weave, a technique in which two layers of cloth are woven simultaneously, the layers interchanging to create reversible patterns. Though her experience was in weaving on foot-powered European-style floor looms, she had spent years researching double weave pick-up techniques, which were used in Pre-Columbian textiles as well as in other cultures.

Jennifer had met Nilda Callañaupa, CTTC’s founder and director, while teaching at weaving conferences in the U.S.  So in the course of planning for the 2013 Tinkuy, the international gathering of weavers sponsored by the Center for Traditional Textiles of Cusco (CTTC), Nilda reached out to Jennifer, asking her to teach a double weave workshop, to re-introduce this traditional technique to the Peruvian weavers.

Jennifer spent the better part of a year preparing for this workshop. Not only did she have to learn how to warp a backstrap loom, she also had to learn how to weave double-layered fabrics on it. She studied with a Guatemalan weaver in Santa Fe and another weaver in Taos to learn the basics of backstrap weaving. Then she studied with Laverne Waddington to learn the mechanics of using four shed sticks, which are necessary for double weave.  She researched the pre-Columbian techniques in Double Woven Treasures of Old Peru by Adele Cahlander and in the research of Ann P. Rowe. She warped looms the Pre-Columbian way using fine natural cotton yarns, though the highland weavers today use wool. She wove a little sampler of the techniques she planned to teach. Although Jennifer could speak basic Spanish, she taught herself weaving terminology in Spanish and Quechua from Nilda’s book, Weaving in the Peruvian Highlands. She wrote step-by-step double weave instructions which were then translated by CTTC. She was a ready as she could be.

Nilda selected twenty of CTTC’s best weavers to participate in the workshop. Jennifer was challenged by the language gap, but she relied mostly on demonstration and they caught on quickly. It was easy for them to weave two separate layers, double-width fabrics, and tubes. And while weaving pick-up designs isn’t new for them, double weave pick-up designing was quite different. They don’t normally use graphed designs, because they memorized their designs when young. So she taught them the new skill of graphing on paper, which received enthusiastic response. Basic techniques were taught in two days, and on the third day they learned how to wind a warp, make a loom and shed sticks for double weave, and set up their own looms.

When a Quechua translator was available, she was able to convey a lot more. The weavers wanted to learn everything in order to do the techniques on their own and be able to pass these skills on to other weavers.

Now Jennifer looks forward to seeing what the weavers are doing with these “new” techniques. She’s heard they are creating interesting work, which doesn’t surprise her. Her reward was bringing this knowledge back to its origins — and she will eagerly say “yes” to any opportunity to return to Cusco and exchange more weaving traditions.