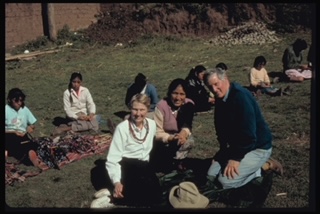 In her book Beyond the Stones of Machu Picchu, Elizabeth (Libby) VanBuskirk introduces herself as “a writer, weaver, and teacher.”  She continues with the statement that “the weaver’s art could never be separated from the larger culture of the Incas and their predecessors.”  Libby VanBuskirk is a serious writer. She is a weaver. She is a visionary. And her story cannot be separated from the story of Andean Textile Arts (ATA).

As part of ATA’s unfolding “memories project,” I was recently treated to a delightful and gracious chat with Libby through the wonders of our now ubiquitous Zoom. This was one of those conversations that I found myself longing for in person. I so wished for a cup of tea, a comfy chair, and a rainy day to while away the hours, listening to the story of her amazing journey unfold.

Like many of us, Libby came of age in a generation where we were “makers” before it was a category of coolness. Her love of textiles took root at an early age, as she sewed to create her own wardrobe. She nourished her creative soul through an undergraduate writing program at Wheaton College in Massachusetts. It was there that she won the Mademoiselle Magazine College Board contest. As winner of this contest, she was granted an interview with T.S. Eliot and the opportunity to follow Sylvia Path as the guest managing editor of Mademoiselle in New York.

She continued her writing career in Boston, where she met and married David VanBuskirk, a Harvard MD with a specialization in family and child psychiatry. David was especially interested in how children play. He was also an avid photographer and was supportive of Libby’s deep interest in textiles and weaving.

As she spoke, Libby recalled that after her children were born, she turned back to her love of textiles and became one of a group of “avid weavers in Boston who exhibited in just about every college in Boston and in Boston museums.” During that time, Libby studied at the Radcliffe Institute for two years, with a focused interest in art and archaeology of Native America, particularly Peru and Mesoamerica. It was Libby’s good fortune to study with artist and ethnic textile scholar Joanne Branford and archaeologist Clemency Coggens.

Libby and David began traveling to Peru in 1982 after several trips to Guatemala and Mexico.  It was on one of these Peru trips that they met a young Quechua weaver, Nilda Callañaupa, whose interest was to revive Andean textile traditions. Libby described their early relationship with Nilda as one where, with true Inca cultural ways, Nilda would “show, never tell us” what needed to be done. It was in this showing of the “something that needed to be done” that Libby and David began forming the board of what became the Centro de Textiles Tradicionales de Cusco (CTTC) and setting up a special project to preserve traditional weaving in Peru through Cultural Survival of Cambridge, Massachusetts.

In 1999, Nilda, the VanBuskirks, and Maria Tacco, from Cultural Survival, met in Cusco to form the plan for the CTTC and acquire legal status as a Peruvian not-for-profit organization. Then, working with Ed and Chris Franquemont, Susan Bruce of Harvard, Maria Tacco, Alice Levy, and Tim Wells, the first Advisory Committee for the CTTC United States was formed. Libby, as first editor of organization’s La Tejedora newsletter, began telling the tale of the actions and resources needed to preserve the ancient textile traditions of Peru.

As they say, the rest is history. Nilda visited the United States a number of times to give presentations to museums and university groups. David and Libby, with David’s extensive collection of photographs and Libby’s skill in telling a story, gave talks to people interested in visiting Peru and learning from the weavers.

During this time, Libby met Nilda’s brother Angel. She was “astounded at the quality of his paintings” and hired him to collaborate with her on a book, which became Beyond the Stones of Macchu Picchu. When I asked Libby where the passion for her life’s work came from, she stated, “I am a big activist at heart. I wanted people around the world to know that Inca people are alive and creative and doing imaginative art.”  She continued, “There are no really authentic, close-up books about Andean children and families today. I retold the tales to share a sense of Andean traditions.”

As someone who is just beginning her journey with Andean textiles, their weavers and traditions, I am deeply and profoundly grateful for the foresight, courage, and wisdom of the founders of CTTC and Andean Textile Arts. As we finished this first conversation, Libby spoke of something she had learned from anthropologist Ed Franquemont about why the Andean textile weaving traditions are so important.  Among his amazing contributions, she recalled, was his calling attention to “not just the way the weaving looks when finished, but also the process by which it is woven. It is the meaning that is found in the process.”

So, thank you Libby and David. Thank you for finding joy and meaning in the creativity and imaginative art and wisdom of Andean weaving. Thank you for sharing the meaning in that process and for gathering the tales of this rich and ancient culture. We are so very grateful for your passion that is still at work today, helping the weavers sustain their heritage and helping the rest of us experience the joy of their artisanship and traditions.

Sandi Cardillo is President of Conrad Associates, LLC, a management consulting and coaching company based in Fort Collins, Colorado. In her work she assists executive leadership teams with structure and strategy needs related to growth and change. Born and raised a Nebraska farm girl, Sandi has a life long love of textiles and fiber. Her undergrad degree in Textiles, Clothing and Design with an emphasis on merchandising launched a successful career as a jewelry buyer. Mid-career, Sandi made the change to training and development, coming full circle to an early love of teaching and eventually leading to forming her own company. Sandi is an avid traveler; a student of culture and people. She is a hobbyist knitter whose mantra for creating is “simple patterns, beautiful fibers”. Sandi joined the board in 2019, after a serendipitous meeting with Marilyn Murphy at the ClothRoads store in Loveland, Colorado.