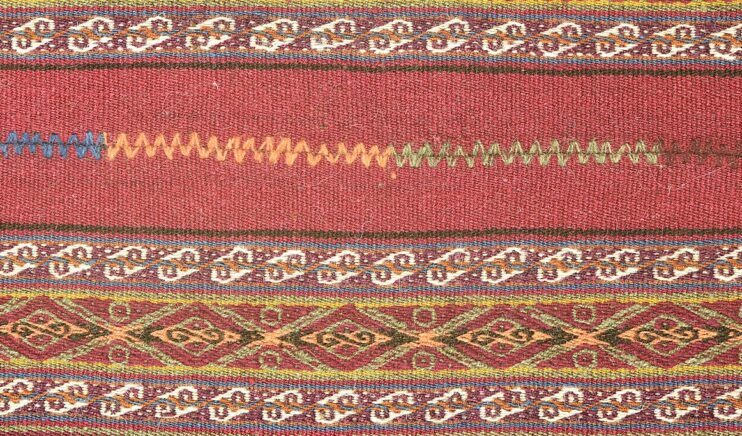 It’s rare to see an Andean textile without an added border, whether an attached band, braid, or fringe, or an exquisite, embellished seam. So much care and attention go into the finishing details, that many weavers in the Andes look forward to these finishing touches.

Finishing details are also very practical. Seams hold two handwoven cloths together for items such as ponchos, blankets, and mantas, while borders and fringes prevent edges from fraying. When borders, edges, and seams wear through, a weaver will carefully take them out and put in new ones, extending the life of the textile for many more years.

Since Andean textiles are woven on a backstrap loom, the width of the cloth is limited to the ability and strength of the weaver. Most textiles then need to be seamed together using an embroidered stitch, called a chukay, with different communities using different joins. For instance, in Chinchero, the distinctive design of a zigzag (q’inqu) stitch can be done as a single color, but many times is done in sections of different colors. In Patabamba, the chukay is stitched in a ñaccha (comb) design.

Some edge finishes are woven separately as narrow flat bands and then sewn around the edges of the cloth. Others, generally tubular, are attached to the finished piece along with the weft as they are being woven.

The communities in the Cusco region of Peru weave slightly different variations of borders but the basic structure remains the same: weavers create narrow warps, usually the width of a small band, which they then sew onto the edge of a textile at the same time of weaving. The weft is held on a needle, and after passing the weft through an open shed, the weaver sews the weft through the border of the textile using the needle. This ensures that the weft always finishes on the same side of the warp that it started on, pulling the warp around the edge of the textile to form a tube. The outer side of the tube forms the design while the inner side, not seen, are floating warp threads.

The simplest of tubular borders are woven in a plain-weave edging, called chinka chinka. The central warp threads in chinka chinka appear and disappear, thereby creating dots or dashes of color.

A more complex border from Chinchero is called ñawi awapa (eye border) and it’s a bugger to weave if you’ve ever tried it. The loom consists of a forked stick (tanka) to keep the warp threads in order and some form of batten to beat the weft tightly in place (a tongue depressor works). The warp is then tied to the body and tensioned at the other end to something stable. The weavers attach the ñawi awapa edging  to the textile at the same time as they weave the edging.

To learn more about these techniques, including how to do some of them, read Secrets of Spinning, Weaving, and Knitting in the Peruvian Highlands by Nilda Callañaupa Alvarez (Thrums Books, 2019). The book is available through Schiffer Books.