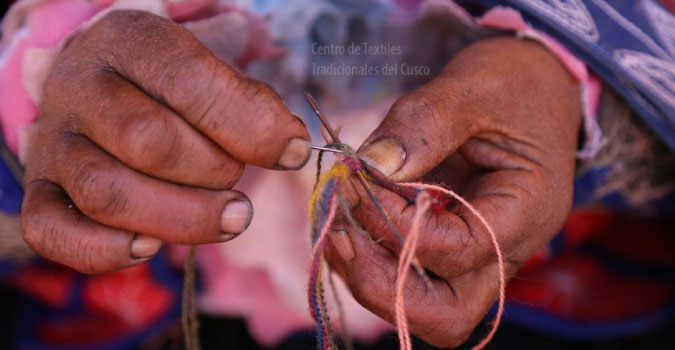 An amazing exhibit of work by the Andean weavers of the Center for Traditional Textiles of Cusco (CTTC) was recently on display (May 3-June 30) at the Museo Inka in Cusco, Peru. The exhibit, “Reclaiming Ancient Paracas: The Struggle to Recover a Textile Technique” (sponsored by Andean Textile Arts), showcased pieces the weavers created using the pre-Colombian Paracas and Nasca tubular cross-knit looping technique.

Recovering textile practices of one’s ancestors takes time and dedication. The exhibit originated nearly three years ago when 20 Andean weavers from CTTC-associated weaving communities attended a workshop at the 2017 Tinkuy conference (also sponsored by ATA). In a unique union of academic and indigenous descendants of the Nasca,  professors Soledad Hoces de la Guardia and Ana Rojas, expert scholars from Chile, taught the workshop and shared their knowledge of the previously lost technique. Sometimes referred to as “looped embroidery,” cross-knit looping (“anillado cruzado”) was used in early Paracas and Nasca textiles from the south coast of what is now Peru.

After the workshop, the attending Andean weavers returned to their communities and taught the rediscovered technique over a five-month period to their fellow weavers. Each community produced a jointly created cross-knit looped piece and participated in the annual CTTC weaving competition. These pieces, as well as other displays, comprised most of the incredible exhibit at the Museo Inka in Cusco.

The Andean people are descendants of the Incas as well as the Paracas, Nasca, and other ancient people. The Andean weavers behind the cross-knit looping exhibit worked incredibly hard to rediscover and reproduce this ancient, ancestral technique (as well as others) into a renewed textile art. Bringing this technique to life again in modern times fulfills so much in the heart of the weavers.