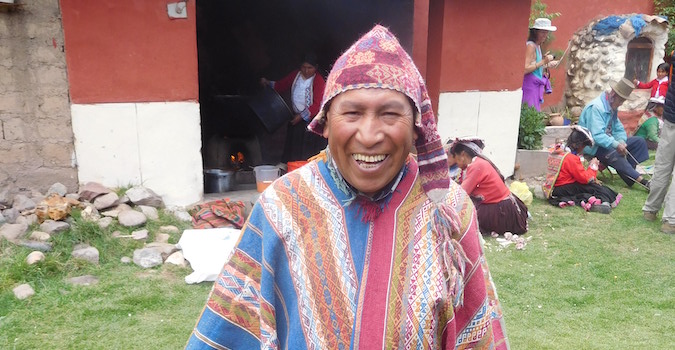 As I watched Timoteo, a master weaver after more than forty-five years, work with the weavers in his Peruvian community, I realized I was also watching a master teacher. Small groups of young weavers led by more experienced weavers were learning a discontinuous warp technique (also called scaffold weaving or ‘tillca’). Timoteo observed the groups and from time to time would tell a teacher to add something to the instruction or correct how the technique was being taught. Through this type of layered learning (wherein students learn technique, and at another layer teachers learn to teach and improve their own weaving), Timoteo and the other older accomplished weavers were passing on the precious weaving techniques of their ancestors to future generations of Andean weavers. Dedicated to the Andean art of weaving, Timoteo has spent a lifetime learning and working towards the preservation of his culture’s textile heritage.

Timoteo is originally from the San Pablo District in Santa Barbara, Peru. When his father abandoned the family, he and his mother moved to the Pitumarca District in the Canchis Province. As a small child, he visited churches that had older Andean textiles that were used to dress the saints. Textiles are a part of the air one breathes in the Andes. It is one of Timoteo’s great life passions to preserve the older weaving techniques and to revitalize the ancient traditional ways. This value began at an early age.

Traditionally in his area the knowledge of weaving was passed from mother to daughter, but Timoteo’s mother taught him to weave when he was eleven years old and she was going blind. His weaving supported them both. When he was fifteen his mother died. He had no land to grow crops so his weaving helped him to survive. Timoteo visited many smaller communities surrounding Pitumarca to learn weaving techniques. Eventually, he developed a small business collecting weavings from weavers in outlying areas and selling to shops in Cusco. In the process of doing this, he saw many fine and older Andean textiles (approximately 200 years old) that were very finely spun, woven, and naturally dyed. This keyed his thoughts to more deliberately reviving and preserving what had come before.

I first met Timoteo during an Andean Textile Arts (ATA) tour visit to the Pitumarca Weaving Association. He was standing, spinning, and moving about in the weaving association courtyard. The courtyard is the communal center of the association where the weavers meet to weave, spin, socialize, have lunch together, and hold workshops or meetings. The weaving association is key for the Pitumarcan weavers, and well as many weavers from the smaller communities who travel to be part of it. It facilitates learning, the marketing of their textiles, and their participation with nine other communities that work with the Center for Traditional Textiles of Cusco (CTTC), an Andean owned and operated Peruvian non-profit.

Timoteo is an important community elder and one of the founders of the Pitumarca Weaving Association. The chief organizer, he was the guiding force with CTTC to establish the Pitumarca weaving cooperative, including working with his wife through the very complicated local legal system to help obtain the land in Pitumarca for the weavers many years ago. Over time, Timoteo has been instrumental in founding nineteen different weaving associations in other small communities in the Pitumarca District. These associations empower weavers to strengthen their weaving communities, learn more, and sell their work to their advantage.

The Pitumarca District sits in an area where the ancient Wari people (who greatly pre-date the Inca) once lived. Influenced by the Paracas and Nazca cultures, the Wari were superb weavers and tendrils of their brilliance were still apparent when Timoteo was a young man. At that time, however, much of the area’s cultural textile traditions was in profound danger of being lost forever. Timoteo, with the help of the CTTC and a keen focus and great energy, helped the weavers of Pitumarca to recover the knowledge and use of natural dyes.  Since the Pitumarca weaving association has been established, many more textile traditions been retrieved and evolved into modern practice.

In a video featured on the Smithsonian Folklife Festival blog, Timoteo recounts being deeply saddened by how the discovery of aniline dyes pushed aside the use of natural dyes for more than eighty to ninety years.  In addition, in the late 1960s and early 1970s, the emergence of machine-made acrylic yarns also contributed to a profound loss of Andean textile traditions, which hold not only beauty, but Andean cosmology, history, and cultural identity.  It has been his life’s work to rectify this loss and to empower weavers of numerous small communities to retain, revive, and use this cultural treasure that was left by their ancestors to better their lives and to preserve their heritage.

“Weaving is our culture, because it is what our ancestors, mainly the Inca, have left us. . . .They were able to leave us messages through the weavings they left us,” says Timoteo in the Smithsonian video. As he holds a woven piece in his hand he recounts: “Weaving encompasses everything. It is our culture. We should not forget it.”

In 2013 Timoteo was recognized by the Peruvian Ministry of Culture and was given the distinction of Meritorious Person of Culture (Personalida Meritoria de la Cultura) for the work he had done to preserve and protect the Andean Textile arts and culture. Today Timoteo continues to instruct young people, encouraging them to also teach and pass on their knowledge. He supports numerous weaving associations and maintains a group of ten or so other weavers from eight communities in the Pitumarca area, helping to market their work at his own shop space in Cusco on the main plaza next to La Campania Church. He is an amazing example of what one person can do in his or her personal sphere to bring about positive change. He has touched many lives and, with others, has been a tremendous instrument of cultural empowerment and preservation for the Andean people. Timoteo Ccarita Sacaca encapsulates deep thought and passion for his art, his people, and his culture.