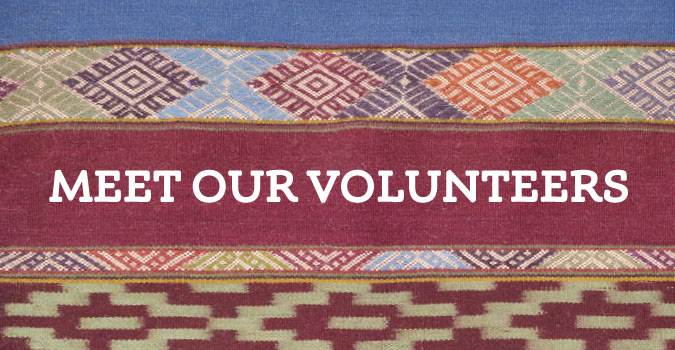 You may recognize Bob Miller’s name. He is one of our regular blog authors, providing his perspective on Andean-related books and delving into amazing textile techniques such as four-selvedge cloth. He also does a lot for Andean Textiles Arts (ATA) behind the scenes, researching and writing textile descriptions for our auction and helping to select topics and book titles for our Andean Textile Talks and Andean Book Club meetings.

Bob grew up in Virginia and graduated from Virginia Tech with an an engineering degree. Afterwards he headed to Colorado, where he spent his entire thirty-nine-year career and raised three children with this wife, Jean. He’s retired now. “Colorado was just about perfect for Jean and I, with plenty of nearby opportunities to hike and backpack together,” he says. And hike he did, exploring the secrets of remote places, not only in Colorado but throughout the American Southwest.

Bob combines a love for adventure with a thirst for learning and problem-solving. As an electrical engineer, he always liked the mind puzzles associated with his profession. So, it’s not surprising that about six years ago he was hooked when his daughter-in-law, who is a weaver, introduced him to band weaving on an inkle loom. Little did he know then, he had started down a path that would eventually lead him to ATA and the Andes.

“Weavers need yarn, so I went to the Interweave Yarn Fest in Loveland, Colorado and ran into Marilyn Murphy (ATA president) at her Clothroads booth,” he explains. “Besides coming home with a Sallac shawl, we also came home with a brochure about the 2018 ATA Textile Tour to Peru.”

Bob confesses that he was “late to the international game.” In fact, his journey to Peru with ATA was only his second trip outside of the United States. His first was a post-retirement excursion to Scotland a few months earlier.

“There has recently been an awful lot of negativity about other cultures, particularly those in Central and South America,” Bob says. “I made up my mind that it was time for me to really learn about these cultures for myself. I’m not necessarily saying that’s the reason we went on the ATA tour but it dovetailed into that and it was very transformative for Jean and I.”

Not long after Bob landed in Peru, he was struck by the beautiful strength in the faces of the Quechua people. “You go for the textiles, but you fall in love with the people,” he says, pointing to their humor, love of family, and unparalleled hospitality.

Prior to going on the tour, Bob learned everything he could about the region’s backstrap weaving. “I wasn’t very good at it,” he admits, “but I took lessons in Peru, and I’ve never looked back. I still weave exclusively with a backstrap loom.”

As Bob became more comfortable with backstrap weaving, he posted some of his Andean-inspired weaving on Facebook. “It wasn’t long before a weaver or two in Chinchero (Peru) asked to be my friend,” he says. Now he has a group of about forty or fifty friends on social media that speak only Quechua or Spanish. Thanks to Google Translate—and his own limited Spanish—he’s getting to know them and learn more about their lives. He hopes one day to meet many of them in person.

Bob and Jean have also stayed connected with ATA’s Marilyn Murphy and  others who went on the Peruvian tour. In 2019, a group of them got together in Santa Fe for the International Folk Art Market (IFAM), where he and Jean volunteered to help the Peruvian weavers with sales orders.

Bob continued to pursue his interest in Andean textiles and, in 2020, Marilyn asked him if he would be willing to help write textile descriptions for the first ATA online auction.  “At that point I was getting acquainted enough with the subtleties of Andean textiles that I could start to write descriptions with a little bit of help and a lot of research,” he says. That was the start of Bob’s involvement with ATA. And, as they say, “the rest is history.”

Today Bob serves on the ATA education committee. He hopes that the programs his committee puts together will help turn casually curious people into lovers of Andean people and culture. “That’s what really motivates me for the textile talks and book club. We need to spread the word about one of this culture’s gifts to the world: their beautiful and unique textiles.”

No matter what he does for ATA, Bob believes it is hugely important to be culturally sensitive. He has seen the economic hardship in many of the Andean villages he has visited and wants his work to make a difference there, but not in a paternalizing way. “We don’t need to change the Andean culture,” he stresses. “We need to facilitate and break down barriers, not change the people.”

What advice does Bob have for others interested in also making a difference?

“Find places in the world you really care about, where people have been written off as ‘other.’ Make friends there and stay in touch. Quietly learn all you can about the history, the culture, the contributions, the problems, the injustices, and the unique opportunities, and pour your energy and resources into doing something that matters.”