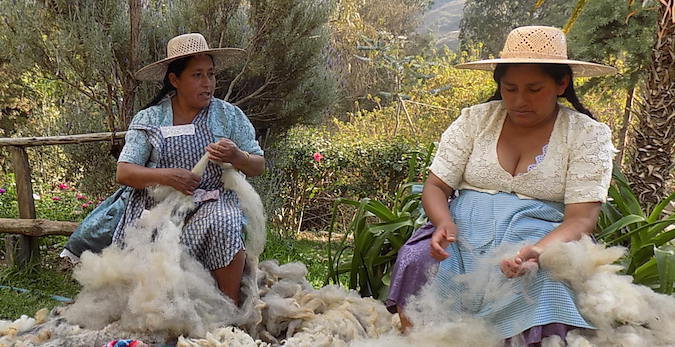 Every October, childhood memories are rekindled in the Bolivian Andes during Spinning Week, a competition honoring a life-long skill. The spinners are the last generations of women born into the farmer subsistence lifestyle when the education of females was considered unnecessary. Doña Maxima Cortez remembers her youth in her rural community of Huancarani as idyllic. She knew where to herd the family flock to encounter her girlfriends, and they whiled away early adolescence shepherding, spinning, talking, and laughing.

In 2014, Doña Maxima was asked to query the weavers in Huancarani about participating in the international Spinzilla Spinning Week Competition. The response was enthusiastically affirmative. Spinzilla was organized by a group of volunteers under The National Needlearts Association (TNNA) umbrella to “celebrate all that’s wonderful about making yarn by hand.” ClothRoads sponsored the 25-member Bolivian team who named themselves the Warmis Phuskadoras (Women Who Spin with Drop Spindles). That first year, the team spun 66,071 yards finishing in a respectable twenty-third place among fifty-two teams from fourteen countries. For four years, they were the only Latin American and all-drop spindle team.

Spinzilla ended in 2017, but the Spinning Week routine continues. Team registration and event planning take place in July. Sheep hides are purchased or sheep sheared, and the fleece is readied for the drop spindle. Spinning Week begins the first Monday of October. Thick yarn is spun for home use or finer yarn is spun to be natural-dyed for weavings for the international market.  Mid-week in Huancarani, the spinners gather to socialize, share lunch, and eyeball each other’s progress. The day after the competition ends, measuring begins on Huancarani’s church porch. The three people making up a measuring team are a measurer, someone tallying the yards, and the spinner who keeps an eye on the measuring and tallying as she winds her yarn back up into its 2-ply ball. Spinners who must herd their flock to the measuring site are given priority.

In 2018, the spinners were not to be denied their highly anticipated social events and held their own Spinning Week. In 2019, the event evolved into a local competition. The original Huancarani team was reduced to sixteen spinners and a second team of sixteen from three communities was formed. Doña Justina Vargas, a top-ranking spinner and coordinator of events in Huancarani, is the captain of the original team. Doña Maxima is the captain for the new Phuskadoras Alegres team (Happy Women Who Spin with a Drop Spindle). Spinning Week was rechristened La Semana de las Phuskadoras (The Week of Women Who Spin with Drop Spindles).

The Spinning Week finale in Huancarani is the year-end annual weavers meeting, a feast, and the Spinning Week prize ceremony. All team members win the same prize, which they choose during July’s event planning. The prize is personal, usually an article of clothing, and provides tangible recognition of a life-long skill. Their girlish laughter rings out into the surrounding mountains as they gather, many spinning, to celebrate this day that is just for them.

(Spinning Week is possible thanks to ClothRoads sponsoring the Spinzilla team for four years and to the ongoing support of generous spinners and weavers around the world. You can read information about Spinning Week and view two short volunteer-produced Spinning Week videos at www.pazaboliviablog.com.)

Dorinda Dutcher moved to Independencia, Bolivia, in 2006 as a Peace Corps volunteer. In 2007, the weavers of Huancarani asked if she would assist them in rescuing natural dye techniques and in marketing their weavings. In 2008, she partnered with Doña Maxima Cortez who had moved with her family to Independencia for school access for her children. In 2010, they expanded Dorinda’s Peace Corps project, dubbed PAZA, by starting the Club de Artesanas to train local trainers in the fiber arts. They have attended all three Tinkuys, and in 2017, Doña Maxima and Doña Justina gave a presentation. In 2018, Dorinda moved back to the U.S. to allow the PAZA activities to evolve without daily foreign influence. Spinning Week is possible thanks to Cloth Roads sponsoring the Spinzilla team for four years and to the ongoing support of generous spinners and weavers around the World. You can read information about Spinning Week and view two short volunteer-produced Spinning Week videos at www.pazaboliviablog.com.